Trade shows and other events are fantastic networking opportunities — but that networking becomes useful only if you follow up with new contacts after the event has finished. A survey conducted by Certain shows that 57 percent of executives wait four or more days to initiate that follow-up contact — a mere 6 percent reach out by the next day.

The 94 percent waiting to follow up are missing out on a key touchpoint with prospects. The same survey revealed that events such as trade shows are considered the second most successful marketing technique for businesses when used correctly. And using them “correctly” relies heavily on the contact that goes on after you’re home from the event itself.

Taking Follow-Ups to the Next Level

Only 2 percent of sales close on a first meeting, so follow-ups are key to making a sale the vast majority of the time — at least five follow-ups, to be more specific: That’s the magic number required for 80 percent of sales, and fewer than half of all salespeople are persistent enough to hit that number.

But for those who do intend to follow up quickly and frequently, it’s important to stand out from the crowd. One of the most memorable ways to get a prospect’s attention? Creative gifting. In 2017, when everything is digital-focused and most marketers and executives receive hundreds of messages daily, a personal touch that really shocks and awes the recipient can make all the difference.

Instead of sending a quick email, an old-fashioned handwritten note is a great way to put in a little extra effort to make a much bigger statement. My team sometimes even sends out a note while we’re still in the same city. It’s one thing to say, “Let’s keep the momentum going,” but it’s another to prove it by ensuring a physical follow-up arrives just a day or two later.

For my team, that shows up in the form of a $9 sheet of steel with a personal note written on the metal with a sharpie — within 48 hours that touchpoint has arrived on their doorstep. We’ll also often plan ahead to have it arrive on whatever day will have the most impact, whether that’s the day of the meeting or a day later or a week later. This kind of precision amazes prospects and makes them think that if your company devotes that much attention to detail on follow-up gifts, then your team must devote just as much, if not more, attention to mastering your main offering.

Some interest points are universal for any contact you might make, and one of the biggest is family. Tailor your follow-up gifts to be usable by the recipient’s whole family. That might be a set of nice kitchen knives for cooking family meals, a set of glasses for the dinner table, or even individual canteens for weekends outdoors. Acknowledging the people important to your prospect is a good way to remind them that you view them as an individual person with loved ones and responsibilities, not just as a stepping stone to achieving a business goal.

For a high-quality, family-oriented gift, try giving a handcrafted mug. You might think I’m joking, but my team researches our gifts’ success, and we’ve seen this one work. We gave a businessman worth billions of dollars a handmade $400 mug that featured hand-carved elements of his core values and greatest life accomplishments, and the gift brought tears to his eyes. The simple statement in the form of the mug showed that we’d done our research and knew he was a true family man, and it stood out as a truly remarkable gift.

Assistants aren’t gatekeepers to more powerful employees — they’re integral parts of office ecosystems, and people notice when you treat assistants with respect. The assistants themselves will also notice your efforts. If you treat them like human beings rather than just a voice on the other end of the phone, it’s likely they will be inclined to open some doors for you.

This was made very clear to me when I first started working with my first NBA team. As I was building that relationship, I didn’t just send gifts to the team’s CEO; the office assistant was always included in my follow-up efforts, and after six months, that assistant helped my company get meetings with five divisions inside the team, which eventually led to a six-figure deal.

Limit follow-up gift items to common things everyone uses, such as knives or nice portfolios. Most everyone entertains, even if it’s only on weekends, and every businessperson you meet has to keep track of important documents. Sending high-quality versions of these everyday tools, especially if they’re personalized with a client’s name or monogram, make appealing follow-up gifts because your prospects are likely to actually use them. And each time they do, they’ll subconsciously think of the person who gave them the gift: you.

One of my favorite gifts to offer people is a practical luxury — something expensive and personalized they would never think to buy for themselves. There’s an Australian wine tool, for example, called the Code 38 that’s completely world-class. Presenting it to anyone who entertains is a surefire win, especially if it’s personalized.

Don’t let trade shows and other events go to waste. The follow-up may actually be more important than the initial point of contact. Ensure that it doesn’t go unnoticed by following these steps.

Have you given — or received — a great follow-up gift recently? Let us know in the comments. 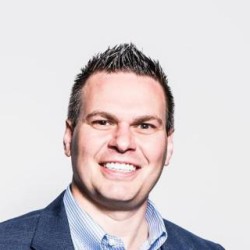 John Ruhlin
Founder and CEO at Ruhlin Group
John Ruhlin is the founder and CEO of the Ruhlin Group, a firm that specializes in high-level gifting plans to build relationships and acquire new clients. The Ruhlin Group’s partnership with Cutco has enabled it to become the No. 1 distributor of Cutco in Cutco’s 60-year history. John is a sought-after speaker on the topics of C-level selling, relationship development, and strategic gifting; he is also the co-author of the best-selling book, “Cutting Edge Sales" and the author of the recently released book, “Giftology.”

How to Craft a Compelling Brand Narrative on Multiple Channels
Digital Marketing: 5 Ways to Build Stronger Relationships with Publishers